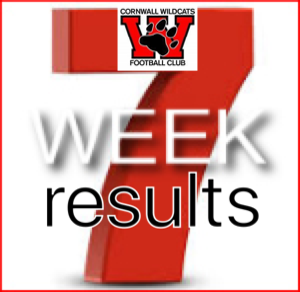 The tykes played the Kanata Knights tough, but still fell to them 45-6, falling to 4-3 on the season.

The undefeated Wildcats mosquito squad were at Barry Hawley Field for the second time this season. Our Cats defeated the South Gloucester Raiders 54-8 and are now 7-0 on the season.

The pee wee’s also took on the Raiders for the second time this season, our Cats defeated the Raiders 27-6. Our pee wee Wildcats now move to 5-2 this season.

All our teams are back home for the last regular season game next weekend. Action starts at 10:30am as the Cumberland Panthers come to town.

No comments to show.